Late last year (2011) I finished a little project that I had planned for a good while – I built my own aquatint box (rosin box). My first attempt was in a pampers nappy box, sealed with duct tape… it worked OK, but leaked quite a bit which is not so good in a home studio.

I’ve been looking for plans or diagrams but found very little online, so I just designed it myself. Having used a large Polymetaal Aquatint box in the studio where I did a few courses, I had a good idea how it worked and drew a 3D design in sketchup.

I then made it using 9mm exterior plywood, some dowels, hardboard and brushes (door draught seals), sealed all the joints with silicon, sealed the door edges with silicon bath seals and made a crank from wood. All the materials cost me less than €60/$80 and it took about 2 days including varnishing.

The box works perfectly, and I get a really even dusting of rosin on my plates. The only issue I had so far is that much of the rosin collects on the two little ledges either side of the box and I have to dust this off with a long handled paintbrush every time before use.

(This was originally posted on wetcanvas.com printmaking forum in October 2011 which led to some related discussions which you can read here) 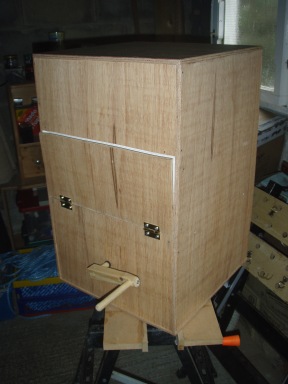